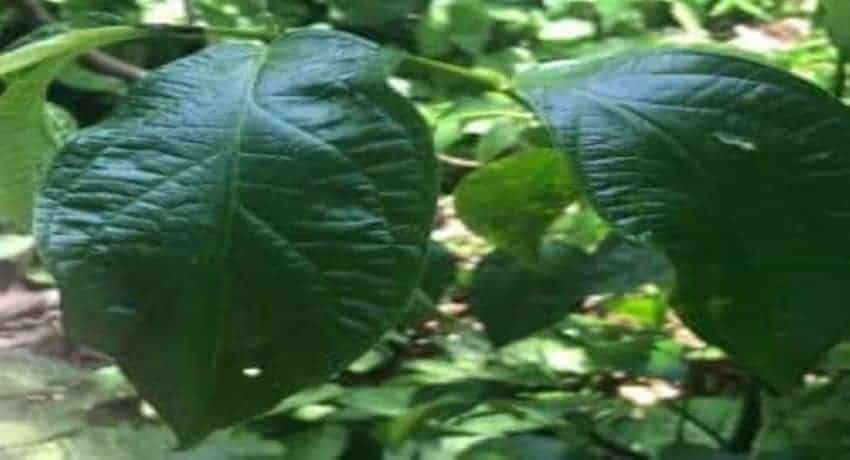 Peperomia Pellucida is just one of over a thousand peperomia species. Thirty-eight of the species have been researched to verify their medicinal potential.

Peperomia Pellucida is the most studied of all the species.

The plant is known by different names in different locations. For example, if you’re in the Philippines it is known as Pansit-Pansitan.

In North America, the most common names for the herb are Pepper Elder, Silver bush, Shiny bush, Man to Man, and crab claw herb.

Guyanese natives call it soldier parsley. In Jamaica, the plant is known by different names depending on where you are on the island.

Peperomia Pellucida is an annual plant that grows in clusters. It has dark heart-shaped, shiny leaves. The stems are jointed so they can easily be broken at the joints.

The plant grows in damp, shaded areas in Asia and the Americas, the Caribbean, and other tropical and subtropical regions.

The actual joints get a darker color than the rest of the stems as the herb matures. That’s why it is called Black jointer or Black joint by some Jamaican natives.

The Pepper Elder plant has flower spikes that bear tiny one-seed fruits that turn dark brown to black when they ripen.

The fruits fall off and will reproduce if the conditions are right.

They also showed anti-hypertensive, and antifungal, activity in tests conducted on various parts of the Peperomia Pellucida plant.

Therefore plants may provide some of these benefits.

Chronic inflammation causes organ and tissue damage that leads to the development of serious diseases.

One test was done on rats to verify the anti-inflammatory properties of Peperomia Pellucida. They were given orally administered liquid extract.

As more bacteria become resistant to current treatment, more research is being done to find ways to deal with bacteria resistance.

Herbal treatments are often looked at as new treatment options. Peperomia Pellucida is one of the plants being researched as a treatment solution to the problem.

In 1994 fresh whole, air-dried Peperomia Pellucida plants were tested to determine the plant’s antibacterial properties. Three different solvents were used in the research.

The report from that study concluded that the plant has the potential to be used as a broad-spectrum antibiotic.

Osteoporosis is the weakening of the bones which makes them susceptible to fracture.

Some 54 million Americans suffer from osteoporosis fueling the need for research new that leads to more treatment options.

In one Research to detect anti-estrogenic agents in Peperomia Pellucida, two compounds were isolated and tested.

The report showed that one of the isolated compounds-pachypostaudin B- displayed anti-estrogenic activity.

The findings determined that the Pepper Elder shows promise as an estrogenic agent for treating osteoporosis.

May Treat Some Cancers

Cancer remains one of the leading causes of death.

According to the National Cancer Institute in 2020, the three most common cancers were breast cancer, lung and bronchus cancer, prostate cancer.

One bioactive compound profiled in Peperomia Pellucida is pellucidin A.

The evaluation concluded that the plant displayed the potential to be used as a treatment for some forms of cancer, particularly breast cancer.

Hypertension is a leading cause of death from cardiovascular disease and stroke around the globe.

One study carried out at the University of the West Indies sought to identify the potential of Pepper Elder in the treatment of hypertension.

Aqueous extracts of the plant’s leaves and stem were used in the experiment.

Indications are that the plant has the potential for being used as a treatment for hypertension.

The plant is used to treat a number of medical conditions.

What the plant is used for is determined by the location it is used.

According to one study the major chemical constituents of the whole plant are stated below.

This article may contain affiliate links. So if you buy a product after clicking a link, I may be paid a small commission at no added cost to you. Thank you!

Some of these along with their activity are listed below:

Apigenin: This is a common compound in many plants. Apigenin displays various anti-inflammatory actions. This includes the ability to airway inflammation.

Acacetin:  This flavone is found in several plants in the Asteraceae family the compound is known to display antiviral effects.

Isovitexin: This compound is found in a variety of medicinal plants. It is known to have anticancer, hyperanalgesic and antioxidant, and other effects.

Pepper Elder is considered invasive in many locations. However, it is an edible herb with many potential health benefits.

The stems and leaves of the black jointer herb are the most commonly used parts of the plant. Pepper Elder tea is the most common form used for medicinal treatment.

In the Philippines, Peperomia Pellucida is one of only 10 medicinal plants endorsed by the Department of Health.

The whole plant is used by Indians in Bolivia to stop hemorrhages.

In Guyana, pepper elder is used as a cough suppressant as well as a diuretic among other things.

In Jamaica black joint tea is used to treat colic, indigestion, and gout. Juice made from the leaves and stem are used for arthritis treatment.

To make a cup of Pepper Elder tea just 3 or 4 fresh leaves or a handful of dried leaves to three cups of water. Boil for 5 to 10 minutes. Remove from heat and strain. Serve when cool. (optional: Sweeten to taste if desired)

Pepper Elder has a peppery taste, though not very strong. It does have an intense mustard-like smell.

The leaves are used in salads.  The stems and leaves are served as steamed vegetables or cooked in soups.

Pepper Elder plants and seeds can be purchased on #Ad Amazon

Incidentally, pepper elder is one of the herbs that sometimes goes into making the world-famous “Jamaican Jerk Seasoning.”

The plant’s odor may cause some hypersensitive people to experience asthma-like symptoms.

Pregnant and Breastfeeding Women should exercise caution when using Peperomia Pellucida as there is very little data on its safety.

Note that the use of herbs to treat medical conditions is not approved by the FDA. Be sure to consult with your healthcare provider to determine the right treatment for you.

If you take prescription medications, be alert to the possibility of herbal remedies interacting with your medication.

Disclaimer: This website is for informational purposes only. Nothing on this site should be viewed as medical advice. Please consult with a professional healthcare provider about matters relating to your medical care.